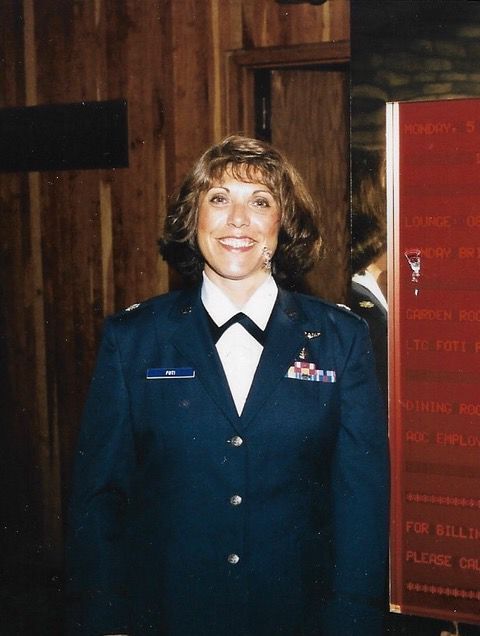 JAMESTOWN — An atlas is one of Cheri Foti’s most prized possessions — a visual memory of a career dedicated to serving her country and others across the globe.

“That’s not bad for a little Jamestown girl who was afraid to leave home,” she laughed.

Foti is a nurse by trade and a retired lieutenant colonel in the United States Air Force. One of the highest-ranking female officers in Chautauqua County, she mortgaged a desire to serve humanity into a 19-year career that took her across the country and throughout the world.

Her journey, however, began in her hometown. The daughter of two working class parents and the first in her family to earn a college degree, Foti never traveled during her adolescent years and found herself not quite “ready to go to college or go away from home” after graduating from Jamestown High School in 1973.

“I wasn’t emotionally ready to leave the nest and our family didn’t travel a lot or go places back then,” she said. “The other thing, too, was the money. I had to pay for college myself so I had to consider my options.”

And so, after a gap year, she enrolled at SUNY Jamestown Community College.

“I wasn’t ready to spread my wings yet, so JCC was perfect for me because it gave me the opportunity to go get a degree and get my education and I didn’t have to leave home,” Foti said.

At JCC, she was fascinated by her studies and encouraged by the professionals who inspired her desire to be a nurse.

“I remember all of my professors — they made the coursework so interesting,” she said, noting one presentation on critical care nursing in particular.

“That lecture immediately changed my life because I knew that was what I wanted to do,” she said. “It was as if electricity jolted through my body.”

She also loved the camaraderie the college provided.

“Back then, there was a student union that was a really little area and it had a TV and everybody would make sure we didn’t have classes at 1 p.m. … and we’d all meet in the lounge and watch “All My Children” at 1 p.m.” she remembered. “Several of my friends from high school also went so we were able to stick together and meet new people at the same time.”

Foti graduated from JCC in 1976 and joined the Air Force in 1978 as a second lieutenant. However, her time at the college was never far from her mind during her subsequent pursuit of a bachelor’s degree in nursing at the University of Colorado Health Science Center and an eventual master’s degree in nursing administration at the University at Buffalo.

She also learned very quickly the expendability of her degree.

“I didn’t always have to be a nurse in the traditional sense of working in the hospital,” she said. “I did work in the hospital, but they were different jobs. What JCC taught me was that you can get a degree in something, but you don’t have to use it necessarily in a traditional way.”

Nothing emphasized that more than her various journeys — from Washington, D.C. to Japan and the many fascinating stops in between.

“I lived in Washington, D.C. at Andrews Air Force base and experienced everything from the arts to the big fancy restaurants to the Smithsonian,” she said. “Through friends I made in the Air Force, I went to Europe for the first time, I went skiing in Colorado in the Rockies — those were just like wow experiences. It was just so unlike anything I had ever experienced in the previous in the 20-some years of my life.”

After her retirement from the military in 1996, Foti’s commitment to service and health continued as a volunteer for the American Heart Association, American Cancer Society, Special Olympics. and Juvenile Diabetes Association.

A passionate JCC alumna, she’s also served as president of the college’s alumni board, and received the Distinguished Alumnus Award in 2019.

“When I moved back here, I still wanted to give back because that is such an important thing, regardless of, even if you don’t have a degree,” she said. “Graduating from JCC made me feel very confident, because I was able to pass college tests and it proved to me that I could get a degree. … It gave me the confidence to move forward to the next chapter of my life.”